The recently aired Silent Sea has rekindled a wave of craving for Korean dramas and movies that depicted dystopian futures for mankind, from catastrophic causes of all shapes and sizes.

Silent Sea — featuring future world where the last drop of natural water has evaporated, leaving a future Seoul and its Han River dried up. (source: Netflix)

That's what we will like to cover here — Korean dramas and movies that paint a dark, dystopian Earth in the near future. In fact, we may even cast the net a little broader and include international dramas or films directed by any South Korean director.

Before further dystopia sets in, let us begin :).

Silent Sea is set in the near future where climate change has caused the world's oceans, rivers and lakes to dry up, leading to severe desertification throughout the world. Nations raced across space to search for sources of water, minerals and new inhabitable environments on other planets and moons.

The Republic of Korea’s Space and Aeronautics Division (SAA) set course for the moon, setting up the Balhae Lunar Research Station on the moon. Unfortunately, a mysterious incident led to the unexplained deaths of the entire crew of 117 at the lunar station.

Five years later, an expedition team, led by Captain Han Yunjae (acted by Gong Yoo), was formed to recover the research samples from the abandoned Balhae Lunar Research Station. One of the team members, Dr. Song Jian (acted by Bae Doona), was an astrobiologist and the younger sister of the previous head of research at the research station, Song Won-kyung, who perished in the mysterious incident five years earlier.

The expedition team made a surprising (and shocking) discovery of the presence of water on the moon. But alas, it turned out that the lunar water was also the cause of the deaths of the entire station crew five years ago. Silent Sea is also the first South Korea drama production that is set in space.

What is a futuristic sci-fi production without nuclear armageddon and .. time travel?

Seoul and the world ravaged by the utter nuclear devastation (source: Netflix)

That's exactly what Sisyphus: The Myth is about. The story tells of a post-apocalyptic future in a world devastated by a nuclear war. The saving grace of this dystopia is a time machine that allows the future survivors to travel back in time before the nuclear war occurred eight years ago.

The story revolves around the genius CEO of Quantum and Time Han Tae-sul (acted by Cho Seung-woo) who developed a time machine in the period before the nuclear apocalypse and a young woman, Gang Seo-hae (acted by Park Shin-hye), who travelled from the future to the same period in a bid to avert the nuclear war by attempting to change the events that led to it.

Another Korean show with a Space theme — Space Sweepers paints the uninhabitable state of our Earth in 2092 due to irreversible pollution. The smog enveloping the Earth has worsened to the point where humans need to wear hazmat face masks to be out in the streets. While most of the Earth's population are stuck on the planet and its putrid air, only a privileged few are able to gain access and reside in the UTS residential district — an orbiting space "biosphere", built by the UTS Corporation, that mimics the ecosystem on Earth, with clean breathable air and rich flora and fauna.

The film stars Song Joong-ki (as Kim Tae-ho), Kim Tae-ri ( as Captain Jang), Jin Seon-Kyu (as Tiger Park) and Yoo Hae-jin (as Robot Bubs) — all of whom are crew members of a space sweeping team which collects space debris floating in Earth's orbit in exchange for money.

Time To Hunt features a different type of dystopia — that of a societal collapse. The crash of the Korean won has led to the collapse of the Korean economy and society and devastated the lives of people. A dystopian world where many lived bleakly in poverty from a total financial, economic and societal collapse. (source: Netflix)

With bleakness in their lives and almost no hope of working one's way out of misery, many resorted to crimes and operating in the dark economies, from contraband trade to underground gambling. Time To Hunt tells the story of four men who decided to plunder a gambling house in desperation.

The film premiered at the 70th Berlin International Film Festival on February 22, 2020, becoming the first South Korean film to be screened in the Berlinale Special section.

When it comes to apocalyptic story lines, count on a global viral pandemic to lend a hand as well. After all, we have really gone through and are still going through a world-scale viral pandemic at this moment. A potential dystopia where humans infected with the contagious "mad person" virus are handcuffed and kept in frozen slumber inside refrigerated container trucks (source: Viu)

Coming off the back of the Covid-19 pandemic, Happiness tells of a failed Covid-19 treatment drug that leads to the spread of the Rita Virus which causes its victims to regress into blood-thirsty zombies. As a result, the virus is commonly referred to as the "mad person disease" virus and is transmitted through open wounds, especially bites from the infected.

When the number of infected persons grows to unprecedented and uncontrollable scale before a vaccine is available, the CDCD (Central Disease Control HQ) resorts to sedating the victims and keeping them under handcuffs in frozen slumber inside refrigerated container trucks. The world splits into two in 2037 — one an impoverished polluted world, another a pristine technologically advanced world

To further convolute the plot, Circle divides the story into two timelines — one in 2017 and the other in 2037. Each timeline tells of a seemingly independent story which eventually merges into one, coherent plot. Interesting.

The events of climate change led to suddenly plunging temperatures on Earth, engulfing the entire planet in frozen snow. The world froze into Ice Age in Snowpiercer (source: Netflix)

Only a handful of the world's population survived the Freeze by frantically boarding a 1000-car train that was designed to circle the Earth through the icey terrain in perpetual motion. That train was known as the Snowpiercer.

The story piques one's imagination of how a 1000-car train can sustain a living population from sanitation to crop farming to cattle rearing and luxury living. Inevitably, Snowpiercer introduces a system of government, enforcement and class hierarchy which allocates the train's dwellers to different societal functions, leading, without a doubt, to class struggles, societal divide and rebellions.

For a Netflix drama that stars Jennifer Conelly as Melanie Cavill, Daveed Diggs as Layton Well and Sean Bean (as the visionary Mr. Wilford), you might wonder — what's Snowpiercer doing in this list?

Well, we wanted to cast a wide net for South Korean-related dystopian shows — Snowpiercer stands on that marginal fringe as it is directed by renowned South Korean film director Bong Joon-ho of the Parasite fame, the highest-grossing South Korean film in history.

We certainly hope you like our selection of dystopian Korean films and dramas — they should make for very engaging watch, if you haven't seen them! 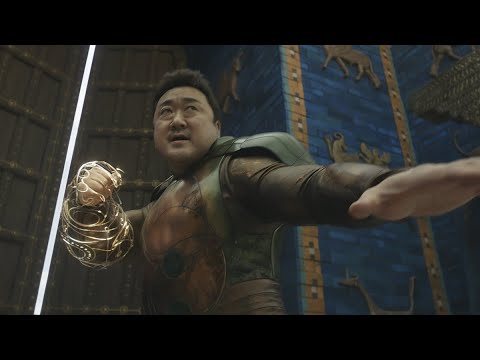 Ma Dong-seok as Gilgamesh in Eternals
Aside from bleak, dystopian scenes, you may also be interested in hopeful, heroic storylines! Read about the Korean actors and actresses who are stepping up to be heroes of hope in the post The Foray of Korean Artistes into the Marvel Cinematic Universe.
k-dramask-movies